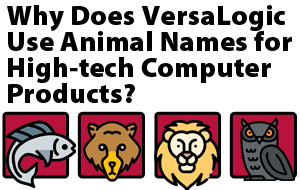 Why Does VersaLogic Use Animal Names for High-tech Computer Products?

As a departure from the usual technical topics, this week’s blog offers a look at why VersaLogic’s embedded computers are given animal names.

Alpha-Numeric Codes Count, but They’re Not the Whole Story

Initially VersaLogic, similar to other suppliers of industrial embedded computers, used only product codes. They started off being short and were intended to convey something about the product.

One example of this was the VSBC-2. “V’ stood for VersaLogic and “SBC” signified that it was a single board computer. Being short, it was easy to use and remember by customers and sales alike.

As the product range grew and more variants of the various product families were introduced, VersaLogic could see that product codes would eventually become more unwieldy. For example, a recently launched product, named Harrier, has the following product code for one of its variants: VL-EPU-4011- EDP-08X-32. This represents the following features:

The product code carries a lot of significance, but it’s not so easy to roll off the tongue or to remember. Hence the animal name, Harrier.

What’s in a Name?

Shakespeare wrote that “a rose by any other name would smell as sweet”. While undoubtedly true for conveying Juliet’s feeling for Romeo, there are some other considerations when considering product names.

For example, would “Squirrel” have been an appropriate name for Ford to use instead of “Mustang”? It’s a good bet that they wouldn’t have had the same success with their product.

So, knowing that the product name should complement the performance or ruggedness of the product, VersaLogic went on a hunt. A wide variety of name types were considered: rocks, gemstones, constellations, aircraft and automobiles were some early contenders. All of these were rejected for various reasons. In some cases, such as with automobiles, rejection was due to potential trademark issues. In other cases, such as constellations, the long Latin names might not be so memorable or be a tongue twister. Rocks and gemstones are passive, and it was desirable to use names that convey a sense of power. The name hunt turned into an animal hunt (no animals were harmed in the writing of this blog!)

There are many different animal classes. Insects were ruled out quickly – the name “ant” doesn’t convey high performance to most people! Just focusing on vertebrates, that opens up mammals, birds, fish, reptiles, and amphibians. Within each of those classes, there are several families. Cats and bears are both families of mammals. And lower down the classifications hierarchy are species, for example, the Lion is a species of cat.

All in all, animals were the perfect choice: no trademark issues, names that could convey power, and many families. Even further, different families could be allocated to each board type, such as cats for PC/104 boards, and there are many species within a family so that new names can be assigned to new products as they are launched.

The Lion, a PC/104 variant with an Intel® Core™ processor and OneBank PCIe expansion capability

VersaLogic introduced a new category of product in 2020, a family of rugged edge micro servers. These needed a new family and species name that represented the power and ruggedness of the products. The bear family was chosen for these embedded servers and the Grizzly was the first product released.

Although not carnivorous, the Grizzly has the power of a 16-core edge micro server

Here’s a summary of animal families used by board type:

Time has shown that using animal names is preferred by most, compared to part numbers. They are easier to remember, and easier to communicate and understand during conversation. Many other manufactures use a similar approach. For example, Intel’s processor code names, such as Apollo Lake or Denverton, make it much easier to remember processor families.

For those interested in knowing more about animal classification, Encyclopedia Britannica has an article on the topic.