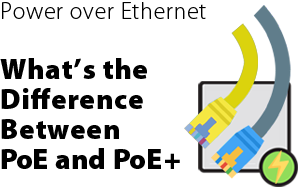 What’s the Difference Between PoE and PoE+?

This blog provides an overview of PoE (Power over Ethernet), and the difference between PoE and PoE+. It explains power sourcing and the various ways that devices in the system can be powered.

What is PoE and Why Do I Need It?

PoE, short for Power over Ethernet, is a way of powering peripheral devices, such as cameras or wireless access points, without the need for a separate power cable or local power source. All of the power needed to operate the device is provided over the standard Ethernet cable.

Without PoE. Peripheral power must be supplied separately

With PoE. Cabling is simplified

PoE comes in a variety of flavors and the related standards have been developed within the overall remit of the IEEE 802.3 Ethernet Working Group. The original definition of PoE envisaged the Power Sourcing Equipment (PSE) would deliver 15.4W and, after line drops, 12.95 W would be available to the Powered Device (PD). PoE+ takes this up to 30W from the PSE with 25.5W available at the PD. Higher levels are also possible with PoE++ which specifies up to 100W at the PSE. The purposes of this discussion, we’ll focus on PoE and PoE+.

The following table shows the main differences between PoE and PoE+

As you can see the main difference between the two is the maximum amount of power available. PoE+ can provide twice as much power to the powered device.

With the introduction of PoE+, the specifications of 802.3af were rolled into 802.3at. The terms PoE and PoE+ are widely used, but the terms Type 1 (PoE) and Type 2 (PoE+) are also used. In addition, there are also 5 defined power classes. During power-up, the PSE determines the power classification of the PD. To avoid damage to non-PoE enabled devices, the PSE will only supply power to PoE enabled devices. The five power classes are:

When is PoE+ Required?

There are many types of PDs such as cameras, wireless access points, VOIP phones, light fixtures, and sensors. Their need for PoE versus POE+ is based strictly on their total power requirements (either above or below 12.95W). We’ll look at a couple of these.

Whether a wireless access point requires a PoE or PoE+ may depend on the environmental conditions. The Cisco Industrial Wireless 3700 Series is a good example. When operating in environments of > -20°C, PoE power is sufficient. However, when the temperature plummets into the range -50° to -20°C an internal heater is required, driving the need for PoE+ power.

There are basically three ways to provide PoE power: a PoE injector, a PoE enabled network switch, or a PoE equipped port on a computer.

A PoE injector, otherwise known as mid-span PSE, is located between the end points.

A mid-span PSE breaks the cable run into two sections

The advantage of this method is that a non-PoE enabled host device does not need to be replaced. The disadvantage is that cabling has to be separated and the mid-span PSE has to be inserted.

A less complicated solution is to use an end-point PSE. These take two forms: a PoE enabled host or a PoE enabled network switch. The network switch is required when multiple powered devices need to be connected to the network host. However, when the speed of Ethernet is being used to support a single powered device, a PoE enabled host computer may be the better and simpler solution. One example would be where a wireless access point needs to be powered in a field-deployable battlefield tactical communication system or workstation cluster.

Industrial / embedded computers may have PoE ports built-in, or they can often use some type of PoE expansion board. VersaLogic’s “Grizzly” computer board is an example of a high-performance system that includes built-in PoE ports.

PoE expansion cards can be used to add PoE capability to embedded computers that don’t already have it. An example of that is the VersaLogic MPEe-E6E-P Mini PCIe card which provides a 1 GbE PoE+ port. It plugs into any Mini PCIe slot and can source up to 30W for PoE+ class 4 connected devices.

For a deeper dive into PoE, Microsemi has a white paper that provides more detail. Want to know more about VersaLogic’s range of products with PoE options? Let’s start a conversation.